According to legend, Hung Gar was named after Hung Hei-Goon, who learned martial arts from Jee Sin Sum Si, a Chan master at the Southern Shaolin Temple. The temple where they trained had become a refuge for opponents of the Qing Dynasty, who used it as a base for their activities, and was soon destroyed by Qing forces. Hung, a tea merchant by trade, eventually left his home in Fujian for Guangdong, bringing the art with him. 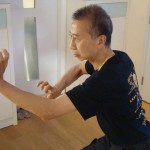 Even though Hung Gar is supposedly named after Hung Hei Gun, the predominant Wong Fei Hung lineage of Hung Gar claims descent not from him but from his classmate Luk Ah Choi (陸阿采), who taught Wong Fei Hung’s father Wong Kei-Ying. Also, Wong Fei Hung had a second Master named Lam Fook Sing. Because the history of the Chinese martial arts was historically transmitted orally, much of the early history of Hung Gar will probably never be definitive as each family of Hung Gar practitioners only agree to a point. 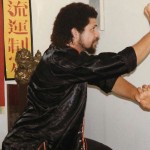 Because the character “hung” (洪) was used in the reign name of the emperor who overthrew the Mongol Yuan Dynasty to establish the Han Chinese Ming Dynasty, opponents of the Manchu Qing Dynasty made frequent use of the character in their imagery. Hung Hei-Goon is itself an assumed name intended to honor that first Ming Emperor. Anti-Qing rebels named the most far reaching of the secret societies they formed the “Hung Mun” (洪門).

The Hung Mun claimed to be founded by survivors of the destruction of the Shaolin Temple, and the martial arts its members practiced came to be called Hung Kuen.
The hallmarks of the Wong Fei-Hung lineage of Hung Gar are deep low stances, notably its “sei ping ma” four level horse stance, and strong hand techniques, notably the bridge hand and the versatile tiger claw. The student traditionally spends anywhere from months to years in stance training, often sitting only in horse stance for hours at one time, before even learning any forms. Each form then might take a year or so to learn, with weapons learned last. Today, some instructors will stick to traditional guidelines and make stance training the majority of their beginner training. However, the demand on stance  is nowhere near it was in ancient times. Hung Gar is sometimes mis-characterized as solely external; that is, reliant on only brute physical force. However, the student advances progressively towards the cultivation of qi (chi) and an internal focus.